Systematic Evaluation of “Compliance” to Prescribed Treatment Medications and “Abstinence” from Psychoactive Drug Abuse in Chemical Dependence Programs: Data from the Comprehensive Analysis of Reported Drugs 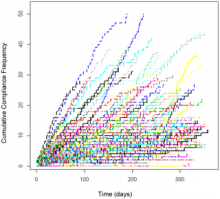 This is the first quantitative analysis of data from urine drug tests for compliance to treatment medications and abstinence from drug abuse across “levels of care” in six eastern states of America. Comprehensive Analysis of Reported Drugs (CARD) data was used in this post-hoc retrospective observational study from 10,570 patients, filtered to include a total of 2,919 patients prescribed at least one treatment medication during 2010 and 2011. The first and last urine samples (5,838 specimens) were analyzed; compliance to treatment medications and abstinence from drugs of abuse supported treatment effectiveness for many. Compared to non-compliant patients, compliant patients were marginally less likely to abuse opioids, cannabinoids, and ethanol during treatment although more likely to abuse benzodiazepines. Almost 17% of the non-abstinent patients used benzodiazepines, 15% used opiates, and 10% used cocaine during treatment. Compliance was significantly higher in residential than in the non-residential treatment facilities. Independent of level of care, 67.2% of the patients (n = 1963; P<.001) had every treatment medication found in both first and last urine specimens (compliance). In addition, 39.2% of the patients (n = 1143; P<.001) had no substance of abuse detected in either the first or last urine samples (abstinence). Moreover, in 2010, 16.9% of the patients (n = 57) were abstinent at first but not at last urine (deteriorating abstinence), the percentage dropped to 13.3% (n = 174) in 2011; this improvement over years was statistically significant. A longitudinal analysis for abstinence and compliance was studied in a randomized subset from 2011, (n = 511) representing 17.5% of the total cohort. A statistically significant upward trend (p = 2.353×10−8) of abstinence rates as well as a similar but stronger trend for compliance ((p = 2.200×10−16) was found. Being cognizant of the trend toward drug urine testing being linked to medical necessity eliminating abusive screening, the interpretation of these valuable results require further intensive investigation.