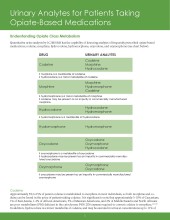 Approximately 5% to 15% of parent codeine is metabolized to morphine in most individuals, so both morphine and codeine can be found in the urine of patients taking codeine. It is significant to note that approximately 5-10% of Caucasians, 1% of East Asians, 1-2% of African Americans, 3% of Mexican Americans, and 2% of Middle Eastern and North Africans are poor metabolizers (PM) deficient in the cytochrome P450 2D6 enzyme required to convert codeine to morphine.1,2,9,10 In addition, hydrocodone is a minor metabolite of codeine, and may be excreted in urine at concentrations up to 11% of parent codeine.1,4

The primary analyte detected in urine of patients administered morphine is morphine itself, but several studies have suggested that hydromorphone is a minor metabolite. Small amounts of hydromorphone have been detected in combination with high concentrations of morphine in urine samples of patients prescribed morphine only.6,8 Certain investigators have suggested that codeine is also a minor metabolite of morphine, but most agree that codeine arises as an impurity in commercially manufactured morphine.1

Analytes detected in urine after oxycodone administration include oxycodone and/or its metabolite oxymorphone.1,3,5 Hydrocodone is a potential impurity in commercially manufactured oxycodone preparations; therefore, a small quantity of hydrocodone could be detected in the urine of patients prescribed oxycodone only.

The primary analyte excreted in urine after the administration of oxymorphone is oxymorphone itself.1 Oxycodone is a potential impurity in the process of commercially manufactured oxymorphone; consequently, a small amount of oxycodone could be detected in the urine of patients prescribed oxymorphone only.2,7